Phages are the natural enemies of bacteria. They only attack bacteria and are harmless to people, animals, and plants. Utilizing this property of phage, phage therapy is proposed to treat bacterial infections. The first use of phage therapy traces back almost a century ago, which is earlier than antibiotics application. Phage therapy has received relatively little attention due to the powerful antibacterial effects of antibiotics. But with the rapid emergence of multiple antibiotic-resistant (or multidrug-resistant, MDR) bacteria, there is renewed interest in using phages as therapeutic agents. 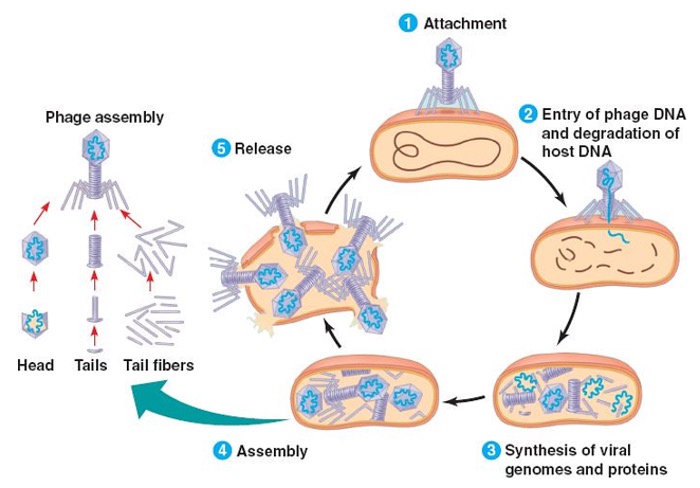 1. Each type of phage only attacks a certain bacterium strain and no other types of bacteria. While antibiotics attack more than one kind of bacteria including some good normal bacteria in the body, thus may lead to some side effects such as upset stomach, cramping, diarrhea, nausea, and vomiting.

2. The overuse of antibiotics leads to the generation of MDR bacteria which may trigger the most frequent and severe infection. Phage therapy is a potential treatment for MDR infection. When bacteria evolve into MDR bacteria, phages subsequently evolve into stronger phages against the MDR bacteria.

Monophage therapy refers to the use of a single phage type as therapeutic agent. It is primarily used for the development of phage therapy experimental models, as proof of concept during the design and testing of phage preparations. The disadvantages of monophage therapy are that it requires precise matching between the pathogen and the phage.

Virion-associated peptidoglycan hydrolases (VAPGH) and polysaccharide depolymerases are two groups of proteins that are required during phage adsorption to the host and ejection of its genome. VAPGH on the phage base plate can locally degrade the bacterial peptidoglycan layer, accelerating the ejection of the phage genome into the host. Polysaccharide depolymerases can specifically degrade the polysaccharide components of bacterial cell envelopes, even the biofilms. These enzymes help to phage adsorption, invasion, and disintegration of the host bacteria. Given the special functions of these phage-derived proteins, they can be explored and developed into novel antibiotics, adjuvants for antibiotics, and bacterial biofilm disruptants. Creative Biolabs established therefore a platform that discovers phage lysin-based therapeutics.

The combined application of certain antibiotics and some virulent phages are capable of efficient reduction of bacterial cell densities. Combined therapy, which is developed using the phage-antibiotic synergy, is effective in avoiding antibiotic resistance and improving therapeutic efficacy, especially against infectious biofilms.

In several European countries, phage therapy has been extensively used in the treatment of human infectious diseases. Due to the problem of antibiotic resistance, phage therapy can be an effective and safe alternative. In addition, the use of phage on specific bacterial communities can be used for the adjustment of human commensal microbiota.

In the food industry, quality assurance of food is the primary issue to be addressed. The problem of food safety needs to be considered due to the misuse of various preservative additives. Pretreatment with phage in food is a reliable alternative to preservatives to control food quality caused by foodborne pathogens. In addition, the pathogens in the feed of animals could be also controlled by phages to avoid antibiotic residues.

Phage is also an effective treatment for disease infections in some agriculture. The prevention and removal of certain infectious bacteria are needed to ensure the effective growth of crops, as the yield of crops is an important economic indicator. Infection by plant pathogens is reduced by treating the crop itself with phage or by pretreating its seeds. Due to the development of antibiotic resistance and the lack of effective means of control in many plant pathogens, coupled with consumer preference for organic and antibiotic-free products, phage therapy has a promising future in agriculture.

Antibiotic resistance to pathogens that cause animal infections are becoming a critical issue affecting animal health. In addition, antibiotic residues in meat, eggs, and milk have been a serious problem for human health. Phage therapy in animals is a new direction of development, especially in animal husbandry, which avoids the residues of chemical antibiotics in animals and cures animal infections effectively, ensuring the health of both animals and humans.

Creative Biolabs is an outstanding biopharmaceutical company that is engaged in exploring effective and safe treatments to improve human health. We have organized a staff of scientists with extensive experience and expertise in the research of phage therapy and are committed to providing best-in-class, one-stop services for global clients. Our service portfolio includes:

If you are interested in the development of phage therapy, please feel free to contact us for more details or get access through the following links: