Phages, the most abundant biological agents on earth and natural enemies of bacteria, have been widely used to lyse multidrug-resistant bacteria and reduce the adverse effects of chemicals on food. Creative Biolabs provides customers worldwide with the most advanced, comprehensive, and stable phage therapy in food safety development services.

Bacteriophages can be divided into virulent phages and temperate phages according to different life cycles, virulent phages can encode endolysins and break down bacterial peptidoglycan in the final stage to release their progeny, while temperate phages are able to integrate their nucleic acids into the genome of host cells. Phages in the food industry are mainly used in three different stages: directly on animals or plants to eliminate bacterial infections, in food production to prevent foodborne pathogens from entering the human body through the food chain, or directly in food to preserve products.

According to statistics, foodborne infections caused by chicken, beef, pork and other products are usually related to the presence of Campylobacter and Salmonella, while dairy products often contain Campylobacter, Salmonella, Escherichia or Listeria. The most common bacteria that infect vegetables and fruits are Salmonella, Escherichia or Listeria, various species of Vibrio and Salmonella are mostly found in fish and shellfish. Since phages tend to have narrow specificity and recognition capabilities, the types of phages studied and used are often different depending on the type of bacteria that infects them. 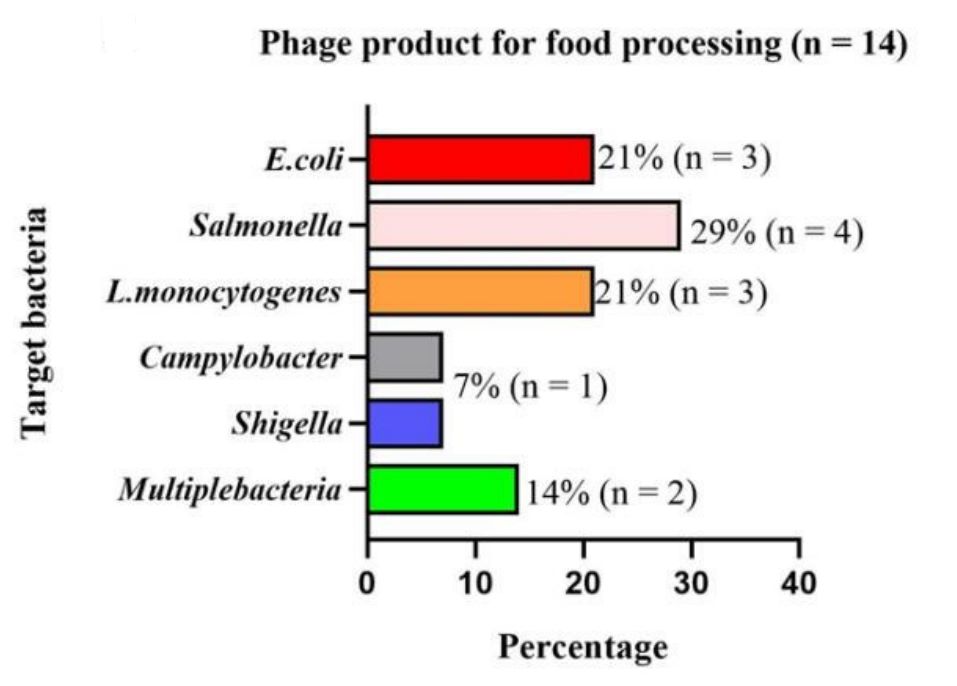 Salmonella is a gram-negative bacillus belonging to the family Enterobacteriaceae, which is mainly found in eggs, meat, animal products or certain vegetables. Almost all types of Salmonella strains are pathogenic and cause severe food poisoning and salmonellosis, and more severe infections can also lead to fatal bacteremia, meningitis, or osteomyelitis. Several phages are available to infect Salmonella strains, including vB_SenM-PA13076 (PA13076), vB_SenM-PC2184 (PC2184) or phage SE07 isolated from sewage.

Fig. 2 Detection of phage cocktails against Salmonella by CFU and PFU assay. (Akremi, 2019)

E. coli O157:H7 is an indicator of fecal contamination in food and drinking water and is also present in foods such as fruits, vegetables, animal products, and meat. Foodborne E. coli O157:H7 infection is one of the most common infectious strains of food poisoning. E. coli infection is mainly characterized by severe diarrhea and enteritis, and its main pathogenic bacteria are Shiga toxin-producing E. coli and enterotoxin-producing E. coli.

Listeria monocytogenes is a small gram-positive bacillus, which has become one of the main pathogens that threaten human health in refrigerated food due to its ability to grow at low temperatures. It is widely found in meat, poultry, aquatic products, and dairy products. Eating insufficiently heated and infected foods often leads to intestinal infections and mononucleosis. It also invades the nervous and circulatory systems and causes severe meningitis and sepsis. Phages A511 and P70 have been shown to inhibit Listeria infection in vitro. 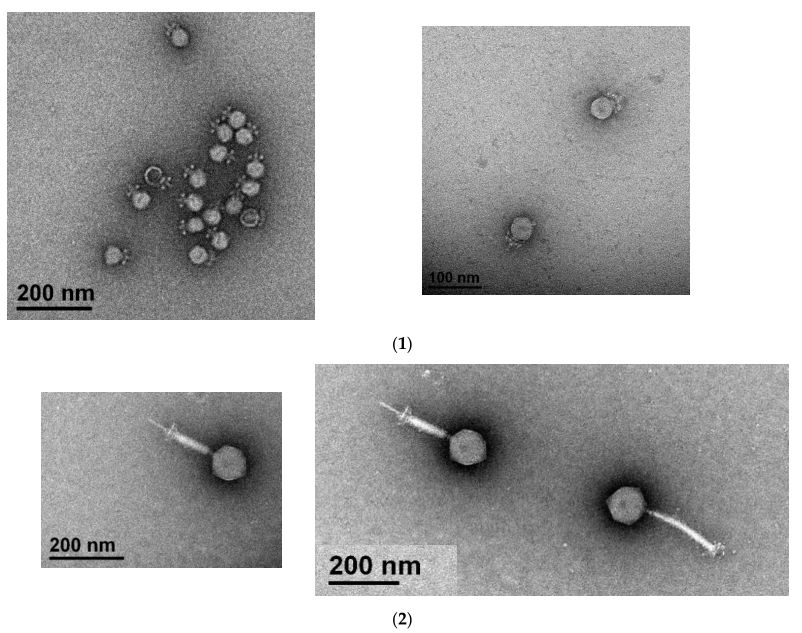 C. jejuni can be transmitted through seafood, meat or poultry products and cause enteritis, phage CJ01 effectively reduces the number of C. jejuni on contaminated meat at refrigerated temperatures. Vibrio is widely present in tissues and organs of various algae and aquatic animals. Phages VVP001, pVp-1 and OMN can effectively reduce the content of Vibrio colonies in a wide temperature range.

In addition to the above-mentioned strains and phages, there are many phage therapy applications in the field of food safety that are being studied or have been put into use. More phage therapies for the food industry are awaited to be developed.

With our strong technology platform and cutting-edge theoretical knowledge, Creative Biolabs provides the most reliable development services for novel phage therapy in food safety, including isolating, amplifying, identifying, characterizing, and engineering phages in a variety of ways to characterize or develop phage therapeutics for specific diseases and pathogens. In addition, we also verify the food pathogen killing ability and flora inhibition ability of your phage of interest by in vitro and in vivo assays. Please do not hesitate to contact us for more information or get access through the following links: