Creative Biolabs is a leading provider of technical services. In our state-of-the-art lab, we have optimized many phage-based tests. We deliver results quickly in easy-to-understand reports to meet customers' needs.

The development of novel antibacterial therapies is crucial for the efficient treatment of bacterial infections soon. Phage-derived therapies include phage therapy and the use of phage-derived proteins as antimicrobial therapies. Since phages encode a variety of proteins that play crucial roles in the phage replication cycle, from host recognition to cell lysis, phage-encoded proteins such as receptor-binding proteins, VAPGHs, endotoxins, and holins have been proposed as possible means to combat antibiotic-resistant bacteria. Several phage-derived proteins have been identified. Peptidoglycan hydrolases and polysaccharide depolymerase are a group of phage-derived enzymes that facilitate the attachment of phages to bacteria and the injection of phage genetic material. They have in vitro lytic activity and antibiofilm activity. 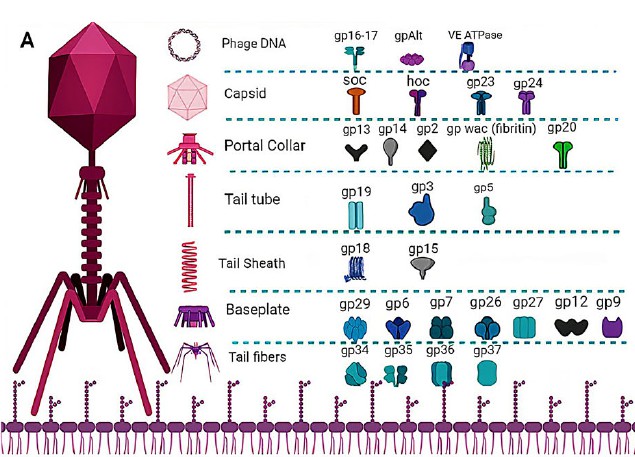 Mode of Action of Phage-derived Proteins

Polysaccharide-degrading enzymes also referred to as polysaccharide depolymerase, are virion-associated proteins employed by phages to enzymatically degrade the capsular or structural (LPS, PG) polysaccharides of their hosts, at the initial step of a tightly programmed phage infection process. Depending on the mode of degradation of carbohydrate-containing polymers on the surface of bacterial cells, phage-associated enzymes fall into two main groups: hydrolases and lyases. The first degradation is peptidoglycan, capsular polysaccharide, lipopolysaccharide O antigen side chain. In turn, the lyase uses a β-elimination mechanism to introduce a double bond between C4 and C5 of the nonreducing uronic acid after the glycosidic link between the monosaccharide and uronic acid C4 is broken. Phages use this enzyme to destroy bacterial host cells in the final stages of their lytic development to ensure the efficient release of progeny virions.

Currently, there is increasing interest in the use of bacteriophages and their lytic proteins in the treatment of drug-resistant bacterial infections. Bacteriophages, the natural enemies of bacteria, have self-replicating particles with strict host specificity that hijack cellular machinery to recognize and kill bacteria. Phages destroy pathogenic bacteria without destroying the microbiota, and can therefore prevent side effects commonly associated with antibiotic treatment, such as antibiotic-related diarrhea. In the future, further experimental and clinical studies are essential for the safety, half-life, dose, and site specificity of phages or their proteomes, which will be used as new therapeutic candidates.

There are many sophisticated systems for bacterial cell lysis encoded by bacteriophages. Their molecular mechanisms, including enzymatic activities and regulatory functions, have been understood in some detail, so there are advanced attempts to their use in the development of antibacterial drugs. Their advantage lies in their efficiency as agents that destroy bacterial cells.