Phage display selection, also known as biopanning, is a screening process by incubating the phage-displayed repertoire of ligands or antibody fragments with antigens. Antigens can be chosed in numerous ways, in which a purified antigen, mixtures of proteins, whole cells, cell fractions, or tissue sections, and even in vivo selection are possible. Creative Biolabs has developed distinguished strategies to optimize the selection efficiency and increase the successful rate of downstream applications.

The phage p3 protein plays an essential role in infectivity into bacteria depending on the integrity of its three domains (N1, N2 and CT). N1 binds to the tolA receptor, N2 binds to the F-pilus, and CT anchors the protein to the phage. Fusion of foreign peptides and proteins at the domain boundaries dose not abolish phage infectivity. However, insertion of protease-cleavage sites in the flexible glycine-rich regions (G1 or G2) leads to an almost complete loss of infectivity under the presence of proteases such as trypsin. In contrast, phage will be resistant to proteases cleavage if the proteolytic sites comprise a folded protein domain. Creative Biolabs has constructed trypsin-sensitive phage display system, which allows proteolytic selection for protein folding. As many of phage in the display repertoires do not display target, but are infective because of integrated p3 contributed by the helper phage, these phages results in background of non-specific binding. Taking the advantage of our proteolytic selection, trypsin-sensitive phage display dramatically reduces background with enrichment factors of more than 104-fold for a single round of selection. 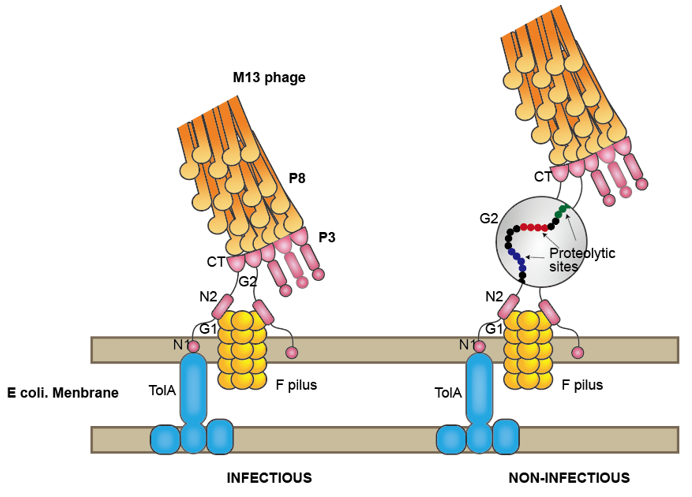 Laser Capture Microdissection (LCM) and Fluorescence activates cell sorting (FACS) are well-validated technologies to isolate subpopulations of homogenous cells. LCM procures small clusters of tissue cells under direct microscopic visualization, and single target cell can be identified using in situ hybridization (FISH) or other alternative analysis. After incubation with phage pool and removing of non-binding phage particles by washing, a UV irradiation is applied, in which phage particles binding to non-target cells are prevented replication in E coli. with those binding to target cells are protected by a UV-resistant shadow stick. In addition, LCM also permits the isolation of specific phage binders from tissue sections (e.g., paraffin embedded, frozen). FACS is based on individual cells' fluorescent characteristics resulted from specific light scattering. Fluorochrome-labeled antibodies are employed, resulting in exclusive binding of phage particles to isolated cell subpopulation while ignoring adulterating entities such as non-target cells and stromal elements. As most tissues such as biopsies and autopsies are composed of heterogeneous cell populations, these two approaches provide rapid selection of ligands/antibodies against known and novel surface antigens in their native configuration, expressed on phenotypically defined subpopulations of cells such as cancer and rare cells. 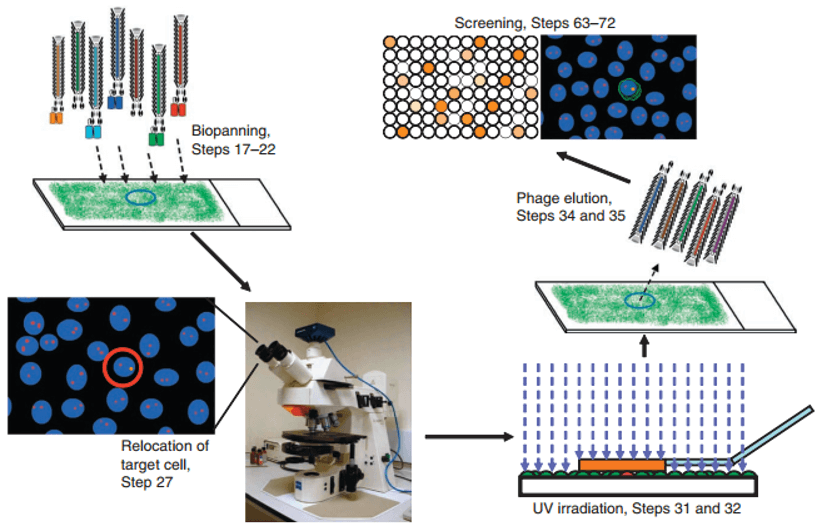 As long-term efficacy of monoclonal antibody-based therapies shows limitations due to resistance mechanisms, new insights into bispecific antibodies (BsAbs or diabodies) that are capable of targeting multiple antigens as a single agent have driven innovative therapeutic strategies. Such diabodies can be generated by protein engineering as well as phage display technologies. Creative Biolabs have generated two phage display-based strategies for the development of BsAbs: 1) the diabody format is formed by the noncovalent association of two hybrid scFv proteins. Hybrid scFvs are consisted of heavy- and light-chain variable domains (with a short linker sequence) specificity for different antigens. Both VH-to-VL and VL-to-VH domain orientations in hybrid scFvs lead to formation of functional diabodies; and 2) the diabody format is assembled with one phage-scFv particle and one soluble scFv, thus the heterodimerization leads to the presence of two different scFvs on the phage surface. In both strategies, phage display repertories are in diabody format which is suitable for the selection for bispecific molecules.

Creative Biolabs is not only an expert who fully grasps the translational properties of phage display technology, but also an innovator who dedicate to maximum optimization to meet your specific needs. Please contact us for more details.