Firstly described in 1985, phage display has been continuously improving ever since and is now a well-established technology for many applications. With more than 10-year of experience, Creative Biolabs has developed an unparalleled phage display platform with diverse display systems and feasible biopanning strategies. This platform not only provides a research tool for the identification, selection, and evolution of molecular interactions, but also serves as a translational technology for the development of in vitro diagnosis and novel therapeutics.

What Is Phage Display?

Phage display is a powerful library methodology for high-throughput screening of molecular interactions. The general procedure initiates from the construction of a library with peptide or antibody variants. By inserting its encoding gene into a phage coat protein gene, a protein (protein fragment or peptide) can be displayed on the surface of a phage particle, with its genetic material resides within the phage particle. This connection between genotype and phenotype allows further enrichment of specific phage. 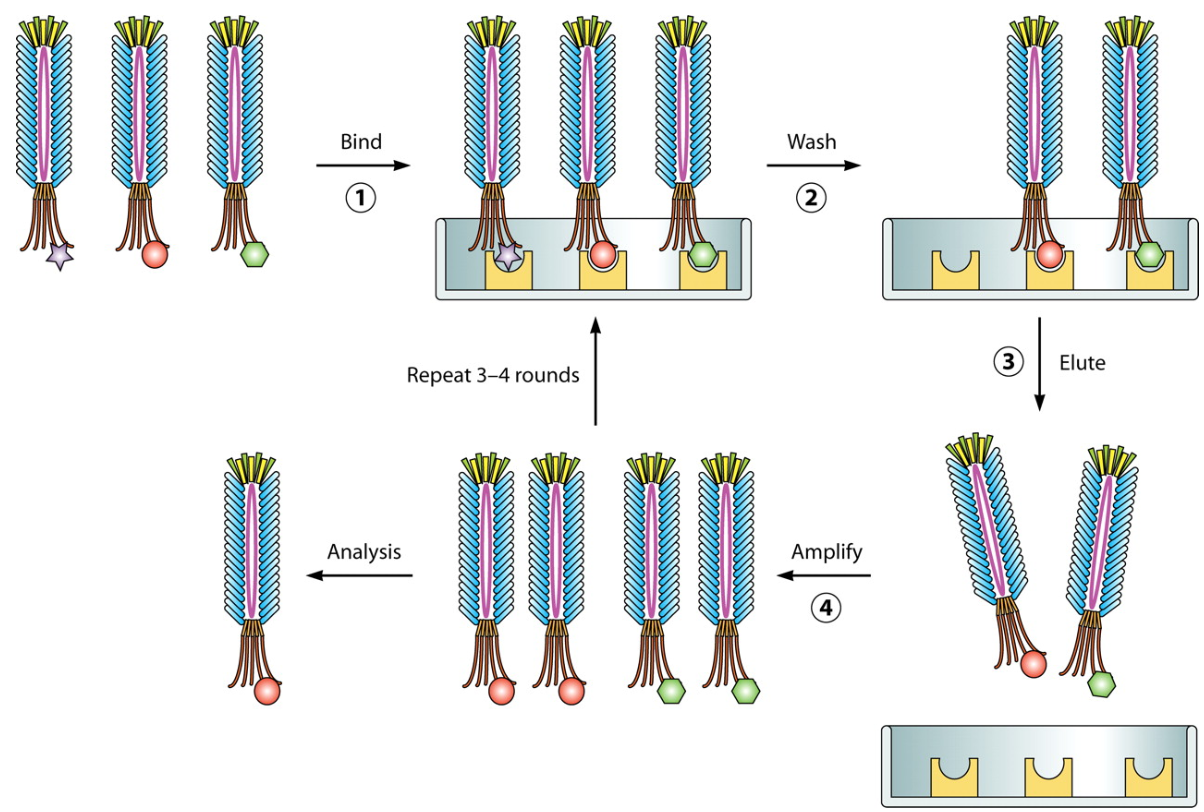 The desired displaying phage is enriched based on affinity to interested targets such as proteins, peptides, DNA sequences or small molecule compounds. This procedure, also called biopanning, is achieved by repeated cycles of incubation, washing, amplification and re-selection of bound phage. Phage particles display a relevant ligand will be retained, but nonadherent phage will be washed away. Bound phage can be recovered from the surface, infected into bacteria, replicated to enrich for those clones recovered from the library, and eventually subjected to more detailed analysis.

Although the principle of phage display is simple, the executive conditions can sometimes be very challenging. A successful phage display project relies on the right determination of phage display system and purpose-driven optimization of biopanning strategy.

Creative Biolabs has developed the diverse phage display systems by using phage vectors such as filamentous M13, T7, T4 and bacteriophage lambda (λ phage). The stable displaying of interest using these vectors is essential to support multiple cycles of biopanning, even under stringent screening conditions.

Novel phage display techniques have been developed in combination with various methods. For example, proteolytic selection of trypsin-sensitive phage dramatically reduces background, thus increasing the panning efficiency. Conjugated with LCM and FACS, both of which are technologies to isolate subpopulations of homogenous cells, specific phage binders against known and novel surface antigens can be isolated from phage display libraries. Notably, dual display with phage repertories in diabody format provides a promising tool for the selection of bispecific molecules.

Phage display has many advantages in exploring molecular interactions due to its feasibility to design repertoires of ligands and the rapid isolation of specific ligands. Taking the full translational potential of phage display, Creative Biolabs supports in comprehensive applications including the development of therapeutic antibodies and peptides, discovery of enzyme inhibitors, selection of receptor agonists and antagonists, epitope mapping, antibody humanization and affinity maturation, drug design and vaccine development.

Creative Biolabs serves as the best partner for global clients. Our in-house scientists can provide multiple strategies and solutions to meet your specific needs. We are the best in terms of knowledge, expertise, feasibility, and customer contacts. Please talk to our experts for more information!