Phages, also known as bacteriophages, are classified as a group of bacterial viruses that only infect bacterial cells and replicate within bacterial cells. Like other viruses, phages are composed of a surrounding protein capsid and a core of either DNA or RNA genetic material. During infection, phages attach to a bacterium and insert its genetic material into the cell. After that, phages usually follows one of two life cycles, lytic (virulent) or lysogenic (temperate). Lytic phages take advantage of the materials and machinery of bacterial cell to synthesize their own components and reproduce within the host bacteria. Then, they lyse the host bacterial cell and release new phage particles. Lysogenic phages incorporate their nucleic acid into the chromosome of the host cell and replicate with it as a unit without destroying the cell. Under certain conditions lysogenic phages can be induced to follow a lytic cycle.

Phages are among the most common and diverse species in the biosphere. They are often found in the places where a large number of bacteria live, such as sewage, soil, and animal intestines. Phages must live in living bacteria and have strict host specificity. In other words, each of phage only infects one type or a few types of bacteria. Depend on this property, phages are expected to as target delivery tools for therapeutic agents or vaccines, or as biosensors for phage-specific bacteria detection. 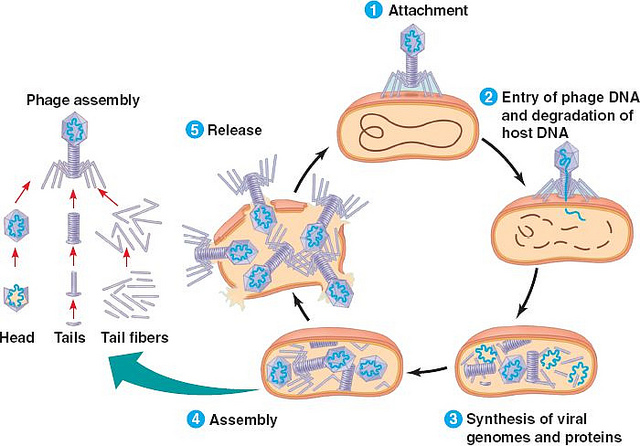 Phages are bacterial viruses that only invade bacteria while harmless for human cells. They are used to treat bacterial infections in humans, so-called phage therapy. The first use of phage therapy trace back to almost a century ago, which is earlier than antibiotics application. Phage therapy, however, has not attracted much attention due to the powerful effect of antibiotics to against bacteria until the rapid emergence of multiple antibiotic-resistant bacteria. Increasing evidences have revealed phage therapy is better than antibiotics in the treatment of bacteria infections. Compared to antibiotics, phage therapy has several advantages: 1) Phages are very specific which usually affect only the targeted bacterial species, while antibiotics possess broad antibacterial spectrum allowing target both pathogenic microorganisms and normal microflora. 2) Phage therapy may induce no serious side effects. A few minor side effects reported for therapeutic phages may have been due to the release of endotoxins from bacteria lysed in vivo by the phages. Antibiotics therapy, while, may trigger multiple side effects including intestinal disorders, allergies, and secondary infections. 3) From an evolutionary perspective, active phages can be selected against every phage-resistant or antibiotic-resistant bacterium by the ever-ongoing process of natural selection. Therefore phage therapy may be an alternative for antibiotic-resistant bacteria infection.

Monophage therapy is to use a single phage type for the treatment of bacterial infection. It is primarily used for the sake of proof of concept during development of phage therapy experimental models. Generally speaking, this approach is relatively simple and low side effects since the preparation and purification of a single phage is relatively simple and the application of a single phage type can reduce complications caused by phage immunological interaction with the treated subjects. However, this approach requires the precise matching between the pathogenic bacterium and the phage. Furthermore, the rapid emergency of bacterial phage resistance also hinders the application of monophage therapy.

Phage cocktails involve the simultaneous use of more than one phage type. It can be designed to target a single bacterial strain, multiple strains of a single bacterial species, or multiple species. Phage cocktails, however, require longer and more complex preparation and purification processes and increase the likelihood of inducing immune responses. In Russia and Georgia, phage cocktails are sold in pharmacies as over-the-counter medication for the treatment of bacterial infections of broad etiology.

A variety of phage-derived enzymes play important roles in the process of phage invasion and lysis of bacteria. For example, phage-derived depolymerases can degrade the polysaccharide components of bacterial cell envelope, such as bacterial capsule and biofilm, accelerating penetration of the antibiotic and whole phage particles. Besides, some phage enzymes, holins and endolysins, are involved in lysis of the host and release of the viral progeny.

Bioengineered phages are applied for phage therapy by modifying natural phages to make them achieve new therapeutic effects, such as expanding host range, switching host tropism, delivery of exogenous genes, or modification of phage capsids. For example, natural phages can be modified to attach antibiotics or photosensitizing agents, thereby increasing specificity of efficacy.

The whole phage particles are expected as promising vehicles of vaccines for the following reasons:

There are two forms of phage-based vaccine, phage-displayed vaccines or phage DNA vaccines. 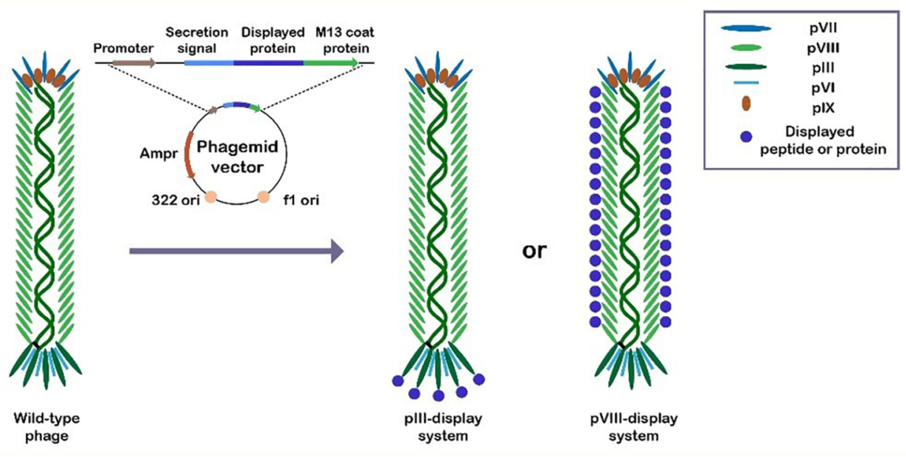 Fig. 3 Phage display of foreign peptides (or proteins) on the filamentous phage by genetic engineering. (Bao, 2018)

Phage DNA vaccines are the phages with the eukaryotic promoter-driven vaccine genes inserted in the phage genomes. These vaccines can deliver the vaccine genes to target cells to express antigens, thereby elicit immune responses for disease prevention and treatment. Both phage-displayed vaccines and phage DNA vaccines represent a brilliant future for developing vaccines.

Phages have the inherent natural specificity for their host bacteria and can be exploited as bacterial-specific sensors for the identification of clinical, food-borne, and water-borne pathogens. Here introduce several methods of phage-based pathogen detection.

Phage typing is a conventional method used for identifying a single strain of bacteria. This method is based on the exclusive interaction between the phage and the host bacteria. A series of different phages with known host ranges attack unknown bacterial strains. If a certain bacterial strain is the host of phages, infection will occur and phages proliferate within bacterial cells. When the progeny phages are synthesized, they induce bacterial cell lysis, resulting in the formation of plaque that can be visualized on a solid overlay plate. Based on whether there is plaque formation, the unknown host bacterium can be identified.

Phage amplification assay is to measure the release of a large number of progeny phages, thus determining the presence of a specific bacterial pathogen. In a basic phage amplification assay, phages are added to bacterial culture and incubated with bacteria. If the bacteria are within the host range of wild-type lytic phages, phages will proliferate in their host bacteria, finally leading to the host cells lysis and the release of amplified numbers of progeny phage. Hence an increasing number of progeny phages can be used as an indicator to measure the presence or absence of a target bacterium in a sample.

When infections occur, the potential, current, or conductivity of culture solution changes due to the release of progeny phage and cellular constituent. Electrochemical methods are used for measure the changes of electrical properties of culture solution to identify whether infections occur or not. For example, sensing of phage-triggered ion cascade (SEPTIC) assay uses electrochemistry to measure microscopic voltage fluctuations that occur after a phage injects its nucleic acid into its host cell. Furthermore, electrochemistry method was also used to measure amperometric changes in solution due to phage-mediated cell lysis and some cellular components release. However, a limitation of this method is that some bacteria cannot produce enough charged metabolites, in which case electrical measurements may be difficult.

SPR sensor is also designed to identify pathogen via detecting the changes in refractive index at the interface due to an antibody receptor and an antigenic bacterial pathogen ligand. Balasubramanian et al. have identified phage specific Staphylococcus aureus via utilizing lytic phage as a probe for bacterial detection in combination with SPR sensor. Firstly, phages specific to S. aureus were immobilized on the gold surface of a handheld SPR sensor. Secondly, S. aureus cells were pumped through the SPR device. Thus some phage-specific S. aureus cells were attached to immobilized phage. Finally, the refractive index changes due to phage specific S. aureus binding and measure the changes could determine strains of the bacteria.

Adenylate Kinase is a phosphotransferase enzyme that directly catalyzes the conversion of ADP to ATP and AMP. It plays an essential role in cellular energy homeostasis. When phages attack host bacteria, host cells lyse and release their cellular components, such as adenylate kinase. Therefore, the determination of adenylate kinase activity can indirectly reveal the endpoint event of phage infection, so as to determine whether a type of bacteria is within the host range of phages.

Equipped with extensive expertise in phage application and advanced techniques, Creative Biolabs is committed to offering the most comprehensive phage-based solutions for global clients, including phage therapy, phage-based vaccines, and phage-based pathogenic bacteria detection. Our excellent expert team is always ready to receive your inquiry and solve your trouble. Please contact us for more details.