Throughout history, diseases caused by bacterial infections have wreaked havoc on humans, including some highly contagious and lethal diseases such as plague, cholera, and typhoid. Fortunately, medical advances that reduce the likelihood of infection and exposure to dangerous bacteria have greatly improved human health, especially as the last century has revolutionized the treatment and prevention of such infections. One element of this is the development and re-evaluation of phages as a potential means of treating and preventing bacterial infections. Creative Biolabs is committed to offering strong support in the development of phage therapies to cure numerous infections.

The struggle between humans and bacteria has started a long time ago, but it was only in the last century that people found effective ways to combat the disease and economic losses caused by bacterial infections. At the beginning of the twentieth century, some serious and widespread bacterial diseases were successfully controlled from two different fronts, biological and chemical. Phages were discovered by Felix d'Herelle in 1910 and introduced to the bacteriology community as a biological antagonist of Shigella. However, it was not until the invention of the electron microscope in 1940 that the phage was observed in its morphology and considered a distinct new entity. After 1945, the use of antibiotics as the preferred method of fighting bacterial diseases made the discovery of bacteriophages of little interest to the medical community. However, with the widespread of multi-drug-resistant bacteria in recent years, the golden age of antibiotics has gradually passed, and the era of bacteriophage as a more potential pathogenic microorganism control agent and an effective tool to fight bacterial diseases is coming.

Bacteriophages are a class of viruses that parasitize bacteria. Toxic bacteriophages kill bacteria by directly lysing host cells to control the number of colonies, while some lysogenicity bacteriophages inhibit bacterial proliferation through lysogenic reactions. Bacteriophages, as potential antagonists of pathogenic microorganisms, have many advantages over the commonly used methods (antibiotics and vaccines), including

Bacteriophages are also unable to solve practical problems in some cases. The differences and problems in the process of phage therapy can be summarized in the following four aspects:

A large number of natural variations in phage and target cells that lead to differences between bacteria pose a big problem for trying phage therapy. While finding and isolating phages is simple and feasible, the necessary steps to characterize, purify, validate, and conduct clinical trials are time-consuming and expensive.

Bacteria may also evolve resistance to phages during phage therapy, which will lead to further bacterial mutations and the birth of superbugs. Bacterial resistance can be avoided by administering several different phages simultaneously. In fact, the vast majority of phage products are produced in cocktails.

Bacteriophages often show complex pharmacokinetics and pharmacodynamics in therapeutic and clinical processes, because the ratio of phages to antibiotics and other drug molecules is huge, and its virulence, adsorption rate, incubation period, and the amount of the number of progeny may also be variable, making it difficult for computational models to predict the pharmacokinetics of the phage in vivo.

Depending on the location of the phage infection and how it is delivered, phage therapy may elicit an immune response. Phages have been shown to activate the innate and adaptive immune systems when administered intravenously. 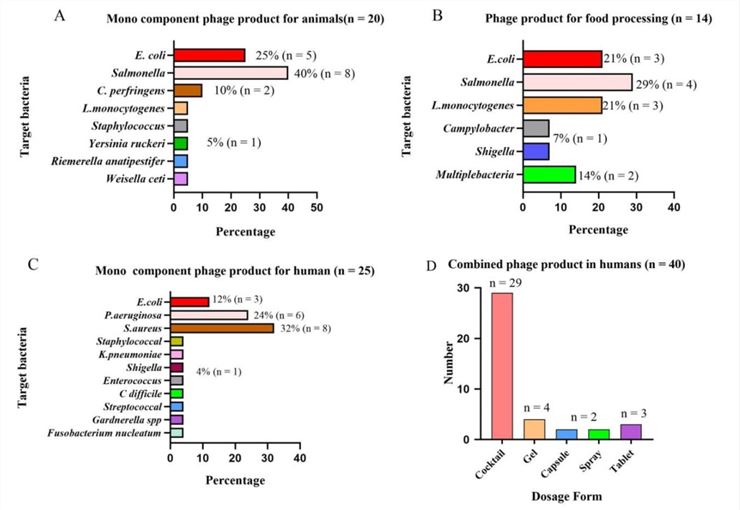 Phage therapy could give us the upper hand in the fight against bacteria in an era of widespread antibiotic-resistant bacteria and avoid a post-antibiotic era. At present, the development of phage therapy mainly revolves around two directions. One is to test existing phages for practical use in fields such as medicine and agriculture, and the other is to isolate and purify new phages to create phage libraries for better screening and standardization of phage therapeutics. Creative Biolabs offers strong support in the development of phage-related therapies. If you have any needs, please do not hesitate to contact us for more information.