Filamentous phages are group of non-lytic phages that incorporate round single stranded DNA, among which M13 phage is the most generally used in phage display. The widely application of M13 in phage display is related to its important advantage that it can be effortlessly purified and used. M13 phage is 6-7 nm in diameter and about 900 nm long. The genome of M13 phage is 6.4kb which encodes 11 phage proteins: proteins responsible for replication (pII, pX and pV), morphogenetic (pI and pIV) and structural (pVIII, pIII, pVI, pVII and pIX). The capsid proteins of M13 phage have been employed to express combinatorial peptide libraries or protein variants. Both major (pVIII) and minor (pVII, pIX ,pVI and pIII) coat proteins can be used, among which pIII (five copies/phage) and pVIII (2800 copies/phage) proteins are the most common proteins utilized for designing phage libraries. This technology allows to identify ligands for not only biological targets such as proteins, cells and tissues, but also inorganics. 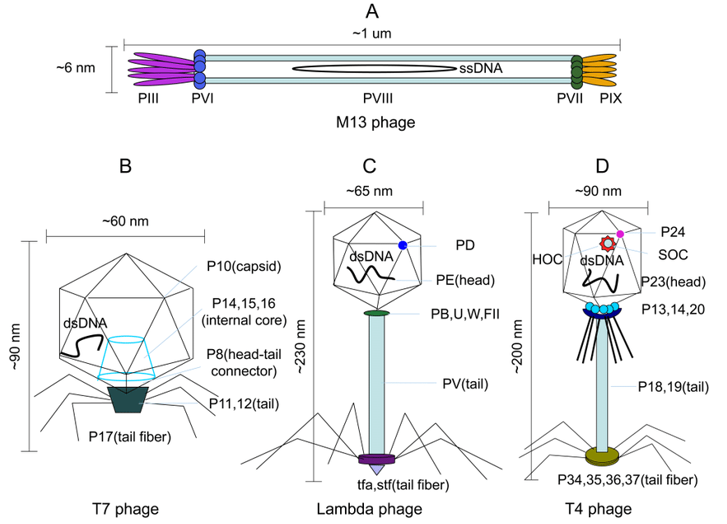 The genome of the T7 phage is 40 kb which encoding six major proteins: primary capsid protein P10A, secondary capsid protein P10B, connector P8, tail proteins P11 and P12 and tail fiber protein P17. The majority of the capsid protein is composed of P10A and P10B proteins. With 415 proteins each head. In T7 display system, foreign peptides/proteins are fused to the C-terminus of P10B protein. Thus, T7 phage can be modified to express different amounts of 10B proteins (1–415 copies), allowing multivalent interactions. The size of the displayed protein can be quite large, even functional enzymes with 1,200 amino acids have been successfully displayed. Different from M13 phage, due to its double‑stranded DNA, T7 phage demonstrates increased stability during replication. Additionally, T7 phage T7 phage is lytic, so display and reproduction does not depend on secretion through the bacterial membrane. Other advantages of T7 phage include its high stability under various extreme conditions, including high temperature and low pH, which facilitates effective high‑throughput affinity elutriation.

Lambda is a temperate bacteriophage of E. coli, characterized by a double-stranded DNA genome of 48 kbp in length. λ phage is composed of two major coat proteins (D protein and PV protein). PD protein is the head decoration protein that is essential for phage morphogenesis. With 405-420 copies per capsid, the abundance of D protein makes it the ideal fusion partner of foreign ligands. It has been reported that D site display does not interfere with the assembly of λ phage, and the displayed proteins can be close to each other in space. PV protein constitutes the tubular tail portion of λ phage, with 192 copies per phage. The C-terminus of the PV folded structure is non-functional area that can be extended or replaced with foreign protein sequences, such as β-galactosidase. In contrast to D site display, PV display system shows an average of one foreign protein per phage, indicating that a foreign protein or polypeptide may interfere with the assembly of the λ phage tail.

T4 is a large, tailed, double-stranded DNA (dsDNA) bacteriophage which has an exclusively lytic lifecycle. The genome of mature T4 phage is 172 kb long which encodes approximately 50 types of proteins, consists of a prolate head and a tail with a contractile sheath terminating in a base plate to which six long tail fibers are attached. The T4 capsid contains two non-essential outer capsid proteins, the small outer capsid protein (Soc) and the highly antigenic outer capsid protein (Hoc). Each capsid particles has 160 copies of Hoc and 960 copies of Soc respectively. Foreign proteins or peptides can be fused to the C-terminus of HOC or the N-terminus of SOC, thus displaying on the surface of T4 phage. More importantly, dual displaying phages can also be generated using T4 phage display system. Increasing interest of T4 phage has been generated for its applications in vaccine development cause Soc and Hoc allow high density array of antigen epitopes in the form of peptides, domains, full-length proteins, or even multi-subunit complexes.