One of the most commonly used and well-established methods for engineering phage genomes is homologous recombination in their bacterial hosts, which can occur between two homologous DNA sequences as short as 23 bp. This mechanism can also be co-opted to incorporate foreign genes into a phage genome and eventually packaged within the phage particle. The generation of gene insertions, replacements, or deletions by homologous recombination with phage DNA is similar to that with bacterial counterparts. Phage genome sequencing is important for the successful design of constructs to modify the phages. A reporter gene, usually encoding luciferase or a fluorescent protein, is commonly cloned along with the gene of interest to facilitate the identification of mutant phages by detecting the reporter.

Another frequently used strategy for phage genomes engineering is bacteriophage recombineering of electroporated DNA (BRED). BRED can be used to delete, insert, and replace genes, as well as to create point mutations in phage genomes. It consists of co-electroporating the recombineering substrates into electrocompetent bacterial cells carrying a plasmid that encodes proteins promoting high levels of homologous recombination. By using this method, modified phages have been obtained at high frequencies (10 to 15%), thus enabling putative mutants to be screened by a small number of PCRs, without the requirement for further selection.

The in vivo recombineering method uses phage as a tool for the engineering of other, less well-studied E. coli phages. Briefly, E. coli cells carrying a defective prophage and the pL operon are infected with the phage to be engineered. The pL operon, which is involved in general and site-specific recombination, is under the control of a temperature-sensitive repressor. The yield of recombinant phages obtained by using this technique is about 0.5 to 2%, which is higher than the yield obtained by homologous recombination. This technique can potentially be adapted to other phages, other bacterial species, or another recombination machinery.

Clustered regularly interspaced short palindromic repeats (CRISPR) in combination with cas genes protect microbial cells from invading foreign DNA. The CRISPR-Cas systems consist of two main components: the Cas proteins, which work as the catalytic core to cleave DNA, and the CRISPR locus, which functions as the genetic memory that directs catalytic activity against foreign DNA. The mode of action of CRISPR-Cas systems comprises three main processes: CRISPR adaptation, RNA biogenesis, and CRISPR-Cas interference. CRISPR-Cas systems are currently divided into three major types, type I, type II, and type III, with a further division into several subtypes. Type I-E CRISPR-Cas system has been used to enhance the engineering of the T7 phage genome. This method thus avoids fishing out a very small percentage of recombinant phages from a large pool of wild-type phages.

Researchers redesigned the genome of T7 phage by eliminating overlaps between genetic segments in a process known as refactoring. These segments were grouped into 6 sections. Bracketing restriction sites were added to the DNA sequence of each section so that the DNA could be altered within each section without affecting the other sections. However, many of the recombinant phages generated smaller plaques than the wild-type phage. Bottlenecks associated with this approach include the difficulty of working with large DNA fragments in vitro and the need to transform bacteria with the engineered genomes in order to recover viable phages, which can be inefficient, especially for non-domesticated bacteria.

Complete phage genomes can also be assembled from synthetic oligonucleotides in vitro. X174 (5,386 bp) has been assembled in this manner. The synthetic phage showed lower infectivity than that of the natural phage, due to PCR-generated mutations. Nonetheless, viable phages were recovered. This approach is likely to be limited to relatively small phage genomes and the potential introduction of mutations via the PCR-based process. However, in vitro DNA synthesis and assembly enable arbitrary genetic alterations to be introduced into phage genomes more easily than other recombineering-based approaches.

Propagating phage genomes in a bacterial host can be toxic for the host, thus limiting the efficiency of phage genome engineering with methods such as homologous recombination, BRED, and in vivo recombineering. This issue can be overcome by using Saccharomyces cerevisiae as an intermediate host for genetic manipulation. Homologous recombination is particularly efficient in S. cerevisiae, and phage genomes do not cause toxicity in yeast and can be maintained stably. With this method, the phage genome is captured in an S. cerevisiae-bacterial shuttle vector. The main requirement is that the shuttle vector must contain overhangs homologous to the ends of the phage genome. This technique has been used to capture and genetically modify the genomes of the coliphages T3 (38,208 bp) and T7 (39,937 bp) as well as the Klebsiella phage K11 (41,181 bp). 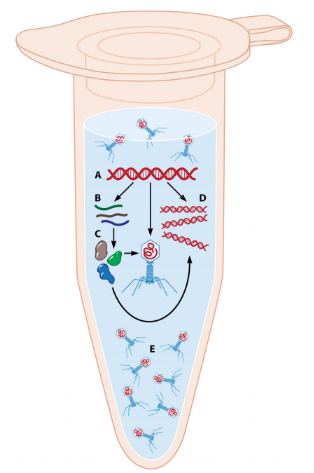 Low efficient transformation poses a bottleneck in the throughput and efficiency of in vitro and yeast-based systems for phage genetic engineering. Cell-free transcription-translation systems offer a potential solution to this problem. For example, such systems have been used to replicate, synthesize, and assemble the T7 phage genome. In this case, as little as 1 nM phage genomic DNA, combined with a TX-TL cell-free system prepared from E. coli BL21 Rosetta2, resulted in the assembly of approximately 0.1 to 1 billion infectious T7 phage particles/mL within a few hours of incubation. This method has also been used to boot up phage X174 to create approximately 1 million particles/mL.

Creative Biolabs has long-term devoted to phage engineering and has accumulated extensive experiences in the development of different engineered phage, such as reporter phage, labeled phage and therapeutic phage. Our advantages includes but are not limited to:

Our highly experienced genomic scientists and quality professionals are here to assist you with all your phage engineering problems. When you partner with Creative Biolabs, we give you undivided attention, share our experience and knowledge, and respond to your needs in a timely manner. Please contact us for more information and a detailed quote.