Equipped with world-leading technology platforms and professional scientific staff in phage screening and phage engineering, Creative Biolabs owns a wide range of natural phage sources from clinic and environment, and we have developed several effective strategies for phage engineering. Our scientists are pleased to share our cutting-edge technology in the discovery of phage targeting bacteria for the development of customized phage therapies.

How Do Bacteriophages Kill Bacteria in Phage Therapy?

Bacteriophages that specifically kill bacteria might help solve the growing problem of bacterial infections. The increasing number of antibiotic-resistant bacterial strains is a serious problem in contemporary medicine. What is important is the fact that these bacteria do not implicate resistance to phage lysis mechanisms. Lytic bacteriophages are able to kill antibiotic-resistant bacteria at the end of the phage infection cycle. Most of them utilize two-component lysis systems to destroy a bacterial cell wall in order to release progeny virions. Thus, the development of phage therapy is a potential way to improve the treatment of bacterial infections.

Phage therapy has many advantages that make it an attractive alternative to antibiotics. Antibiotics have a much wider spectrum and are likely to cause dysbiosis, secondary infections, and other side effects. Unlike antibiotics, phages are very specific to their hosts. Since phages infect only bacterial cells and have no effect on mammalian cells there is no risk of toxicity to the host. Moreover, phages are prevalent in nature, making the isolation and selection of new phages a relatively rapid process in contrast to the development of antibiotics. Thus, the development stage of a phage therapy is relatively inexpensive compared with that of antibiotics. Although bacteria may develop resistance to a particular phage specific to them, there is always a range of different phages with the same target spectrum. Also, a high frequency of mutation allows phages to co-evolve with their hosts, with strong evolutionary pressure to overcome any acquired resistance. Phages also have the advantage that they will only replicate in the presence of their host bacteria and are widely spread throughout the body after systemic administration, thus reaching the site of infection. Their minuscule size allows them to permeate areas that are impenetrable by drug molecules, for example, the blood-brain barrier. Some phages are even capable of infiltrating and disrupting biofilms. Once at the site of infection, the exponential growth of phages may allow a less frequent and lower dose of treatment.

Creative Biolabs is dedicated to discovering phage targeting bacteria for the development of customized phage therapies. Our seasoned scientists employ a range of parameters to score and then select optimal phage cocktails. The process for anti-bacteria phage discovery and product development consists of: 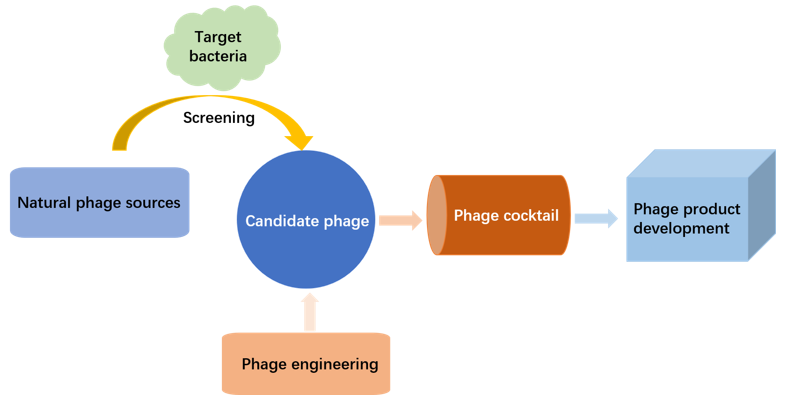 We apply a wide range of clinical and environmental phage-containing samples for high throughput screening against diverse bacteria, which largely increase the success rates of the discovery of natural phages.

As an alternative to natural phages, different strategies for phage engineering will be employed to synthesize phage to target the given bacteria.

In order to select an optimal phage cocktail, candidate phages (natural phages or synthetic phages) identified are characterized referring to a large number of factors, such as genomics considerations, manufacturing considerations and other parameters, including potential hosts, stability, the absence of toxic genes and production conditions.

We can provide the comprehensive services of building proprietary assays, processes, and analyses to support products for pre-clinical and clinical development.

Key Features and Advantages Including but Not Limited to:

Creative Biolabs is pleased to share our cutting-edge technology and extensive expertise in the discovery of phage targeting bacteria to facilitate our clients' research and project development. We offer high-quality customized services by adjusting protocols to meet even the most specific requirements. Please contact us for more information and a detailed quote.