Creative Biolabs is the world's leading scientific service platform, rapidly driving the progress of customers in the field of research by providing reliable, high-quality, and outstanding customer service. As your CRO partner, we can create valuable insights through our powerful scientific knowledge and powerful technology platform.

Phage-antibiotic synergy (PAS) refers to sublethal concentrations of certain antibiotics that enhance the release of progeny phages from bacterial cells. The combination of bacteriophages and antibiotics during treatment is a promising strategy to reduce antibiotic doses and the development of antibiotic resistance. Bacteriophages (phages) have been considered a possible therapeutic option to enhance the efficacy of antibiotics. The use of phages in combination with clinically used antibiotics is one of the most attractive and feasible applications of phages. PAS has been widely used for the detection and validation of various phage antibiotic combinations. However, the methods used to assess these interactions are not defined and, as a result, the methods used vary widely. The detected in vitro interactions are calculated and interpreted as synergistic, additive, irrelevant, or antagonistic, depending on whether the antimicrobial activity of the combined drug is greater than, equal to, or less than that of the drug used alone. The synergistic effects between bacteriophages and antimicrobial agents are determined by broth microdilution limited series method, agar dilution method, or disk diffusion method.

The initial infection of phages occurs by binding to receptors such as lipopolysaccharides, teichoic acid, proteins, and flagella on the bacterial surface. Bacterial surface molecules play an important role in the disease phenotype through mechanisms similar to receptor molecules on bacteriophages. Their components are commonly considered virulence factors, antibiotic resistance-related factors, and normal growth factors because they mediate host attachment and injury and antibiotic efflux, respectively. Phages and antibiotics act synergistically on host bacteria to alter the expression of bacterial virulence factors, antibiotic resistance, and growth factor activities. These mechanisms, in turn, can lead to increased antibiotic sensitivity or inhibition of bacterial growth.

Using the disk diffusion method, it is possible to qualitatively examine the interaction, usually antagonistic, between two agents. 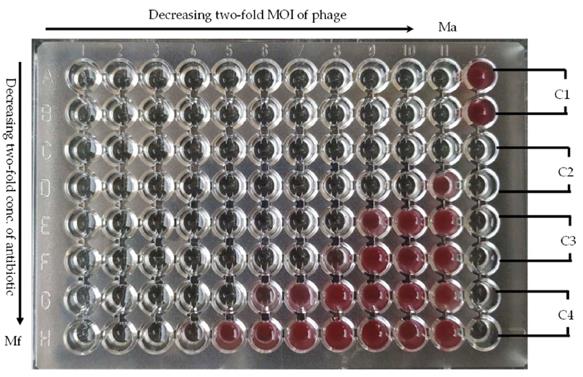 Fig.2 A microtiter plate with checkerboard to estimate the interaction between antibiotic and phage. (Nikolic, 2022)