Creative Biolabs is a world-leading biotechnology company that has been at the forefront of phage research for decades. With extensive experience, we are delighted to provide one-stop phage resistance solutions based on your specific needs.

After decades of widespread usage, the resistance to antibiotics has gradually emerged as a global public health problem. Phage therapy, which uses viruses that infect bacteria as an antibacterial agent, is an attractive alternative to traditional antibiotics. As a result, phage therapy is receiving renewed attention. It is worth noting that the evolution of phage resistance is one of the pivotal issues in phage therapies, which may hinder favorable therapeutic outcomes. On the other hand, it was reported that bacterial mutations conferring phage resistance may lead to fitness expenses for resistant bacteria, which in turn may benefit the host. Therefore, it is necessary to develop methods to monitor the resistance.

Resistance to phages can arise through diverse pathways. Receptor modifications that prevent phage adsorption due to point mutations in specific genes or variation in its expression are the most prevalent. In addition, bacteria may also activate restriction modification systems that are responsible for the destruction of invading foreign DNA. Notably, a strategy to inhibit phage DNA replication has been reported in phage-resistant bacteria. Furthermore, bacteria carry a wide range of heterologous proteins that provide resistance by aborting phage infection. Typically, these abortive infection (Abi) systems target critical steps of phage proliferation, and these Abi systems also result in the death of infected cells.

An approach to combating phage resistance during phage therapy is to replace the phage to which the patient isolated has developed resistance with an active phage. Large collections of bacteriophages are used to formulate personalized therapies. This approach requires periodic susceptibility testing of phages corresponding to the causative pathogen and other available phages that can be rapidly applied when needed. Thus, phage replacement represents a tailored approach to phage therapy.

Phages have been used in combination with a variety of antibacterial agents and have made great strides. A crucial goal of combination therapy is to minimize the expansion of the resistant selection population in the presence of a therapeutic agent. Therefore, combination therapy offers a potentially effective strategy for resistance.

One of the main features of phages as therapeutics is that phages can evolve their strategies to combat bacterial resistance. By pre-adapting a phage to a bacterial host, the phage will experience how the host evolved resistance and will evolve reciprocally. Phage training aims to harness the evolutionary abilities of phages to create more effective phage therapies. 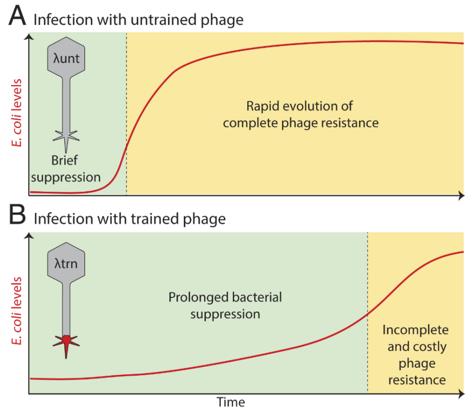 Fig.2 Model of the impact of phage training on the ability of phage λ to suppress E. coli growth. (Borges, 2021)

With advanced platforms and dedicated scientists, Creative Biolabs has always been committed to providing customized phage resistance detection services and phage resistance solutions for your projects. If you are interested in our services, please contact us for more details.