As a leading company in the field of phage, Creative Biolabs is committed to providing academic news and knowledge about phages. Phages play an important role in many ecosystem and congestion applications by shaping and controlling the structure of bacterial communities. Since most viruses have a very narrow host range, a proper understanding of the phage-host relationship is crucial for studying virus biology and the application of phages in biotechnology. The interaction process between phage and host bacteria can be divided into the following three cycles according to the different stages of infection.

The binding between RBP and surface receptors is usually irreversible, and upon binding to the host cell, the phage substrate will undergo a conformational transition, the outer tail sheath shrinks, and the inner tail tube passes through the bacterial outer membrane and periplasm, eventually ejecting the phage DNA into the bacteria, ready to synthesize new phage particles. Some of the well-characterized phages and their receptors are listed below.

Phages and bacterial biofilms exist widely in the natural environment, and phages are not only predators but also inducers and enhancers of bacterial biofilms in this relationship of co-evolution and mutual restraint. In most biofilm components, the matrix membrane, which is composed of polymers and other bacterial secreted products (including enzymes, proteins, lipids, and nucleic acids), accounts for more than 90% of the total content, while microbial cells account for less than 10%. These extracellular polymeric substances can aggregate bacteria, retain phage, and become a physical barrier to prevent phage from spreading and entering bacterial cells.

To start the infection process, phages may first have to overcome various biofilm barriers that exist on the bacterial surface. Phages can destroy the EPS matrix through derivatized depolymerases. These enzymes that accumulate in the phage stomach microscopic or tail spike proteins are also responsible for the depolymerization of bacterial capsules, promoting phage adsorption. In this arms race, bacteria use the process of quorum sensing to regulate gene expression and generate adaptive immunity.

The vast majority of phages currently used for phage therapy are virulent phages with killing ability, and such phages follow a lytic life cycle. After entering the host cell, it gradually takes over the bacterial gene expression system, and in the final stage of forming new phage particles, the bacteria are lysed to release the virus particles into the surrounding environment. Caudovirales accomplish bacterial lysis by using endolysin and holin. Endolysin is a peptidoglycan-degrading enzyme and is responsible for degrading bacterial cell walls from within. For Gram-negative bacteriophages, endolysins are usually monomeric or spherical polypeptides, whereas those of Gram-positive bacteriophages tend to have modular domains. 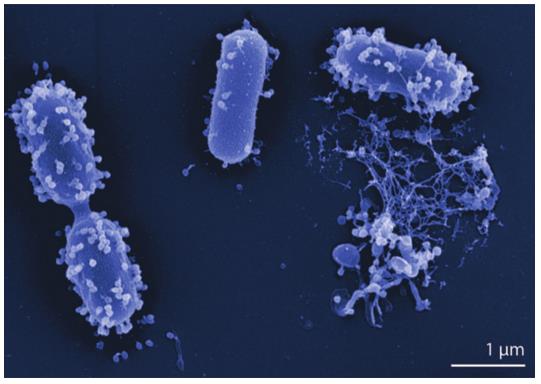 To date, the most potent drug-resistant clinically relevant bacteria is Acinetobacter baumannii, followed by the long-challenging Pseudomonas aeruginosa and other notorious ESKAPE pathogens. They all top the World Health Organization's list of critical bacteria. These pathogenic microbial populations are plentiful, have enormous genetic flexibility and plasticity, and can easily move and exchange genetic material such as plasmids, temperate bacteriophages, and transposons in various natural environments, ultimately causing significant health threats and economic losses. Common and important phage hosts include:

Excellent phage therapy and development are inseparable from a better understanding of phage biology and virology, especially the in-depth study of the interaction process between phage and its host. Creative Biolabs provides reliable phage-related academic support to our global clients. Please do not hesitate to contact us for more information.