Creative Biolabs focuses on providing comprehensive phage services to global customers, such as phage manufacturing, phage detection, and phage-related vaccine development. With our state-of-the-art manufacturing facilities and decades of experience, we are confident to meet your unique project needs. Here, we provide a brief introduction to phage.

Phages are known to be a group of viruses that specialize in infecting specific bacteria. Phages are one of the most abundant creatures in the biosphere and can be found anywhere bacteria exist. Although phages are diverse in size and shape, the basic structure of phages is the same. They are composed of a protein capsid as well as a genetic core. Particularly, the core of phages is DNA or RNA. In addition, most phages also have a protein tail that specifically recognizes receptors of the host bacteria. Notably, similar to bacteria, phages are also divided into different categories based on their morphology and nucleic acid. Most importantly, phages are closely linked to the ecological balance of microbial life.

During infection, phages adsorb to bacteria and inject their genome into the cell. Phages exhibit two distinct life cycles in bacteria, lytic and lysogenic. During the lytic cycle, the phages replicate and then lyses the cell to release new phage particles. During lysogenicity, phages integrate their genome into the bacterial chromosome and replicate with it as a unit without damaging the cell. At later stages, this mild dormant phage can re-enter the lytic cycle and release offspring. 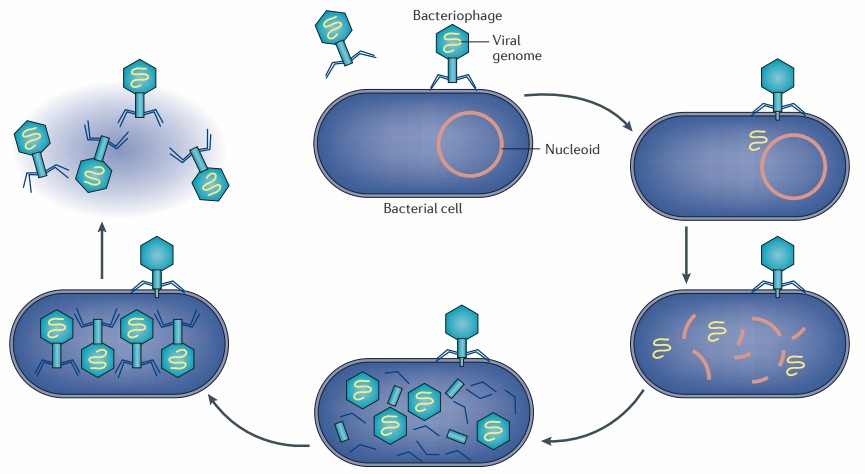 If you have any difficulties with your phage research project, please feel free to contact us to discuss your project plan and get a dedicated solution.