In recent years, lysin is becoming the focus of drug resistance research. As an expert in the field of phage lysin, Creative Biolabs provides comprehensive lysin related services, from lysin bioengineering to in vivo testing services, to assist your lysin project progress.

Phage lysins are a class of highly evolved cell wall hydrolases that play a crucial role in destroying phage-infected bacteria and releasing progeny phage particles into the environment. Generally, lysins possess bactericidal activity against the bacterial host from which they were produced. For example, lysins produced by staphylococcal bacteriophages kill Staphylococci. Therefore, compared with broad-spectrum antibiotics, lysins have a narrower antibacterial spectrum. They are suitable for drug-resistant pathogens and have little impact on the host microbiome. For these reasons, lysins are considered an alternative to address the problem of drug resistance. 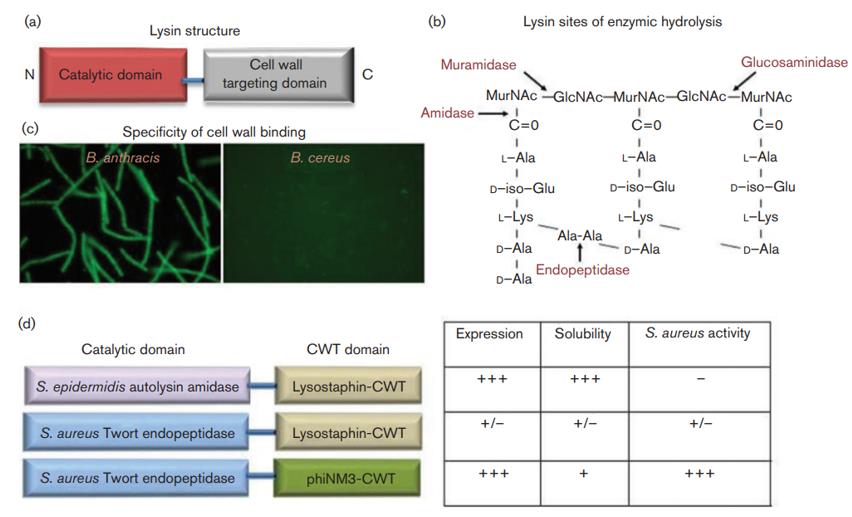 Evidence suggests that lysins exert their lethal effects by peptidoglycan digestion by forming pores in the cell wall. The high internal pressure of bacterial cells is governed by a highly cross-linked cell wall. Any disruption of cell wall integrity will result in extrusion of the plasma membrane and eventual hypotonic lysis. Numerous in vivo assays have demonstrated the high efficacy of lysin against Gram-positive pathogens such as Streptococcus pneumoniae and methicillin-resistant Staphylococcus aureus (MRSA).

What Can We Do?

In addition to natural lysins, Creative Biolabs specializes in engineered lysins resulting from modification or rational design of natural lysins. The modular structure of lysins makes it possible to design bioengineered lysins with desirable properties, such as higher activity, solubility, and thermal stability. Our expert scientists can select an effective antimicrobial agent against any Gram-positive pathogen of interest based on your project needs.

At Creative Biolabs, various in vitro assays are used to characterize the bactericidal activity of phage lysins. The simplest is based on the removal of bacterial lawns on agar plates. In addition, we have many assay services such as turbidimetry to track the reduction in optical density of lysin-treated cultures, and luminescence-based methods to measure ATP released from lysin-treated bacteria to quantify bacteriolysis.

Lysins have been successfully used in multiple animal models to control pathogenic antibiotic-resistant bacteria found on mucosal surfaces and infected tissues. Many animal models of infection are available at Creative Biolabs, such as the mouse model of bacteremia. Notably, our animal models of mucosal colonization play an important role in testing the ability of lysins to kill organisms. Taken together, our in vivo model offers a powerful tool for determining the efficacy and immune effects of lysin therapy.

Creative Biolabs has been focusing on phage over years and established a comprehensive technology platform. Our platform is equipped with advanced technologies and experienced scientists. If you are interested in our lysin related services, please feel free to contact us for more information.