With the development of phage-based therapies, phages have been considered as emerging vehicles for the delivery of immunogenic peptides or DNA vaccines. Creative Biolabs offers not only the development services of phage-displayed vaccines, phage DNA vaccines, and hybrid phage vaccines but also manufacturing services for phage-based vaccines. Our advanced formulation platform and manufacturing facilities enable our global customers to achieve faster access to safe and effective phage-based vaccine products.

Intact natural phage and phage-like particles derived from phage capsid proteins are natural adjuvants that are able to stimulate the innate immune response. CpG motifs in the phage genome can stimulate inflammatory signaling through Toll-like receptor (TLR) pathways, which initiate strong and antigen‐specific immune responses. Therefore, TLRs of phages or phage-like particles can be modified as adjuvants in phage-based vaccines. However, it is noteworthy that TLR-based adjuvant may induce injection site pain to renal and hepatic impairment. In addition, selecting appropriate antigens and adjuvants is of vital importance in phage-based vaccine development. Synthetic nanoparticles can be also used as adjuvants coatings on phages. Complete Freund's adjuvant can be used to produce water-in-oil emulsions of phage, which enhances the immune response and slow release induced by phage as a vaccine. Creative Biolabs designs custom adjuvants based on your vaccine application, route of administration, and therapeutic purpose to achieve maximum immune efficacy, longer presence of antigen in plasma, and longer shelf life of the phage-based vaccine.

Vaccines are typically given as a liquid injection via intramuscular injection, while phage-based vaccines may be administrated via oral administration route, as the phage nanoparticles keep stable along the gastrointestinal tract. To avoid damage to intestinal microorganisms from phages, unlike therapeutic phages, phages used for phage-based vaccines are usually non-lytic phages with non-functional tail fibers, such as recombinant M13 phage particles. Pharmaceutical formulations of recombinant phage particles are usually required to ensure the dispersion, stability, and storability of the phage particles in the drug product. With our encapsulation and emulsification technologies, phage particles can be formed into nanoparticles encapsulated by polymers or liposomes, which meet the requirements of pharmaceutical formulations. In addition, the form of drug products can be modified by our liquid formulation or lyophilization techniques, depending on the form of administration, which can be manufactured into injections or powders, etc. 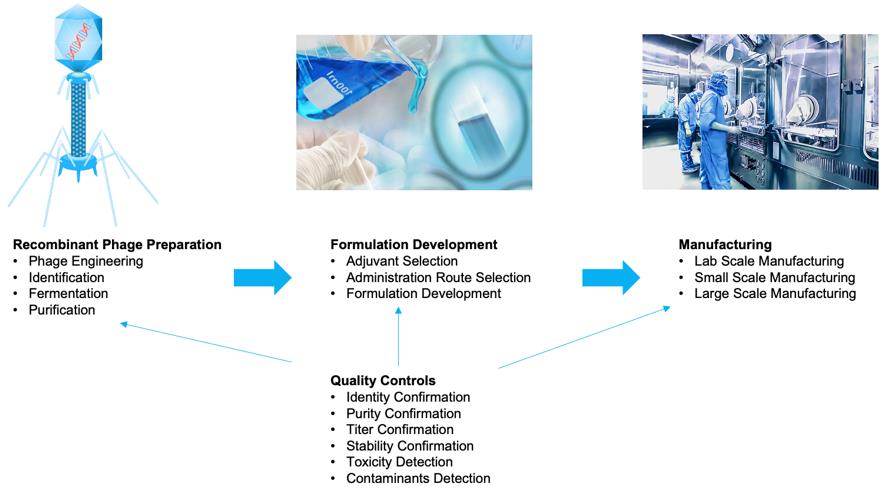